Skip to content
As most of you already know, I am an over enthusiastic travel buff and the mere thought of traveling to a far flung destination gets me all psyched up. If there is one destination in India that will be on top of most youngster’s wishlist – it would most definitely be LADAKH! 😀
Life is all about exploring new destinations and taking a road less traveled. It’s about getting out of your comfort zone and trying something beyond your limitation. Ladakh had always seemed like a place that felt elusive and out of reach. A place I felt I might never get a chance to visit. But things change, and wishes do come true (at least in some cases!) And my plan to visit Ladakh finally materialized! 🙂
It was a  6 day trip and our journey started from Bangalore on a rainy Sunday evening. We took a late night flight from Bangalore to Delhi and decided to stay overnight at Delhi airport. It made sense, since our flight from Delhi to Leh was at 5 AM the next morning. After 2 hours delay due to bad weather, our flight finally took off to Leh! Before we knew it, we were flying over the beautiful Himalayas. The aerial view of these mighty mountains was truly breathtaking and something that will be etched in my mind forever!
We finally landed in Leh in less than an hour and headed straight towards our hotel. It was our first day there and all we had to do that day was acclimatize. Acclimatization would help our body to slowly adapt to the sudden change in altitude. I had already started feeling uneasy. I had never been to a place on such a high altitude before (read: 11500 to 18500 feet above sea level). The highest I had ever been to was probably between 8000-9000 feet max. Our room was unfortunately on the 2nd floor and I would start gasping for air every single time I would go up and down the stairs. Being someone who has always loved and enjoyed activities like trekking/hiking, I had never thought I would face such difficulties in climbing a flight of stairs or walk a small distance. But again, each person has a different way of reacting and you’ll know your body’s capacity only when you go to places like these.
Leh is quiet little town with colorful monasteries, snow-capped peaks, scorching heat, freezing winds, friendly locals, and yummy local cuisine. So after resting quite a bit on the first day, we were all way too eager to explore the town on the second day.

On Day 2, we visited a lot of monasteries in and around Leh. First stop was Hemis Monastery. Hemis is a beautiful, colorful monastery that dates back centuries. It is apparently the richest monastery in Leh. We also got the opportunity to experience and witness the cultural fiesta of Ladakh in all it’s grandeur – the Hemis festival. This festival apparently takes place once every 2 years. It was quite an experience, except for the part where we got terribly roasted in the sun!

After Hemis, we visited Thiksey Monastery and Shey Palace, both of which I skipped. Who has the energy and the patience to climb a million steps in the scorching heat?! Not me. They all look the same anyway! Post this, we visited the Sindhu ghaat and finally ended Day 2 in Shanti Stupa.

Day 3 was one of the most anticipated days of our whole trip. We were supposed to visit the famous Pangong Tso lake!

This place was the only reason I had even planned this whole trip. It was approximately 140 kms from Leh and it took us close to 7 hrs (one way!) to reach the place. Little did I know how badly I was going to be hit by altitude on my way to Pangong. Due to low oxygen levels, I had a headache that was 100 times more than what we normally experience. Add to that, nausea, breathlessness and the scary, narrow roads leading to Pangong. Damn.

You will have to go through the Chang La pass on your way to Pangong. Chang La is at an altitude of 17586 ft. And because the air here is very thin, tourists are not supposed to stay in this spot for more than 15 mins. But no matter how horrible my state was and how out of breath I was, I still got out of the car and ran towards the sign, took a picture and ran back to the car within minutes!

After the tedious journey, we finally reached Pangong Tso! My headache was magically gone and the view in front of me left me spell-bound! Colors everywhere, the lake was turning into various shades of blue and green – add to that a clear blue sky and a beautiful backdrop of the snow-capped mountains. Wow! No matter how much you try to capture this view through your high end lenses, it can still never do justice to the actual sight. Nature floored me that day. And for once, I was speechless!

After taking a million photographs, we finally headed to a lakeside cafe for lunch. Post which I was mentally preparing myself for the tough journey back to Leh. And as expected, the journey back was much worse than I had ever anticipated. I literally went through HELL. Never in my life had I thought I would go through this much pain. A lot of people had warned me about altitude sickness, but I paid no heed. I had always felt I would be able to cope in such conditions. But overconfidence rarely helps. At one point I was literally thinking why I had to put myself through all this just to see one place! The terrible state of the roads only makes your health worse. Thankfully I had moved into another car on our way back, and the driver of that car was awesome! He saw how much pain few of us were in and took a lot of shortcuts to make sure we reached Leh as soon as possible. And we did. We were in the hotel in less than 4 hours! We couldn’t thank the guy enough. I would have probably fainted if it had taken any longer.

Note to Self: Next time I go to a high altitude place, I will definitely get myself checked and take the required medicine to survive in such conditions!

After an over adventurous day at Pangong, none of us had the energy to do anything even remotely strenuous the next day. The initial plan for Day 4 was to go to Khardung La (18380 ft), which was at an even higher altitude than Chang La (17586 ft). But after the hellish experience most of us had gone through the previous day, we decided to postpone KTop to the last day and just settle in for a day of local sightseeing.

First stop on Day 4 was the Sangam, which is the confluence of rivers Indus and Zanskar. They had some river rafting there too. But since I had already done rafting before, I decided to give it a miss. Post Sangam, we went to the Magnetic Hill. Apparently these hills have the magnetic properties to pull vehicles uphill. But we didn’t experience any kind of phenomenon here whatsoever. We just happily posed for pictures and headed back. On our way back, we visited a beautiful Gurudwara, a monastery named Spituk Gompa and the Hall of Fame (a war memorial). 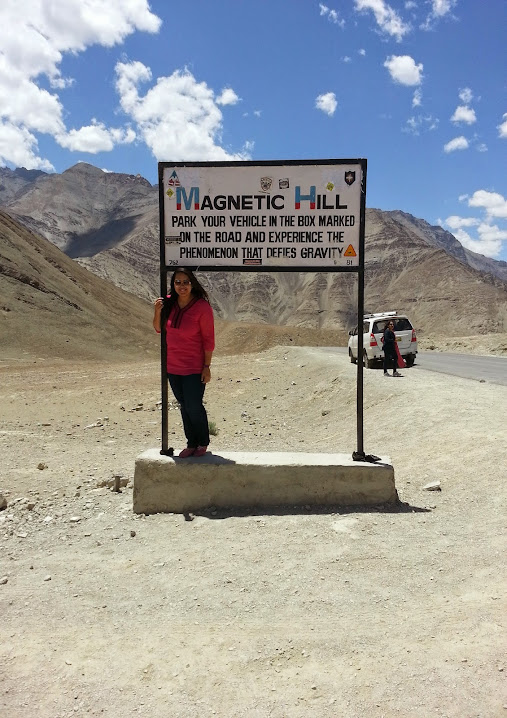 We were famished by the time we finished exploring the Hall of Fame, and headed straight to our favorite restaurant for lunch – Chopsticks. This place had turned into our usual haunt all through our stay in Leh. I absolutely loved the food there. It’s a quaint little place situated bang in the middle of Leh market. If you want to try authentic Ladakhi/Tibetan cuisine – this is the place! Post lunch we visited the Leh palace and ended Day 4 with some shopping.

After a good night’s sleep, our plan was to head off to Khardung La on Day 5. It is not very often that one gets to drive on the highest motorable road in the world. Khardung La, aka KTop is at an altitude of 18,380 feet. After my experience in Pangong, I was very apprehensive about going to KTop. I was already feeling breathless that morning even before leaving. A lot of people backed out based on the experience they had while traveling to Pangong. A big part of me wanted to back out too, and I kept asking myself if I was mentally prepared to go through that same kind of pain and altitude sickness once again. Even after I sat in the car I kept thinking if I should get down and go back to the hotel like many others. But I didn’t. Since I had come so far and since this was one of those places I really wanted to visit, I decided to go no matter what happens!

Leh is at an elevation of approx. 11,500 feet and Khardung La is at 18,380 feet. The distance between the two places is just 40 kms. So, you gain an immense amount of altitude in a very short span of time, which again is the fastest way to get altitude sickness! I popped a painkiller for my headache and kept my fingers crossed! The view while traveling to KTop is breathtaking and the air just keeps getting thinner and thinner. The roads are pretty decent till South Pullu, but after that it is the highway to hell! By the time we reached Khardung La, some of us had started bearing the brunt of it – nausea, throbbing headaches, breathlessness. I know I am not painting a very pretty picture, but none of us still gave up! Surprisingly the pain I felt while traveling to Khardung La was much more bearable than what I had felt while traveling to Pangong. A big reason could be that the distance was much lesser this time. But the amount of happiness I felt after reaching on top of Khardung La was unbeatable!

Hurray! I was on top of the highest motorable road in the world!

With a huge smile on my face, I was slowly taking in the view around me. The altitude sickness and the bitter cold was instantly forgotten and replaced with insurmountable happiness!

Khardung La was one of the last few places we visited on our trip and just when I was getting used to the scenery around, our trip was ending and we were supposed to head back. On our way back from KTop, I was turning and looking around again and again to stare at all that was whizzing past us – the greenery, the mountains, the snow, the beautiful valleys. I not only turned, but stopped and took in the view in awe one last time.

Ladakh was truly an experience I will cherish for a lifetime. A place that has given me bitter-sweet memories and something that I will remember forever.

I hope you enjoyed your virtual tour of Ladakh through my eyes. Hope I get to explore many more such exciting places in future and keep these Travelogue posts going!

Thank you for coming in today and reading my post. Until my next big adventure… it’s Adios from my end!