2016 has been a year of new beginnings, love and mind-blowing travel and I’m loving every bit of it. I had no idea we would be able to travel so much this year. But I’m glad we did.

We knew we wanted to go on a holiday during our anniversary but we weren’t sure where to go. Given the amount of traveling we have done this year and the fact that I was terribly unwell during our anniversary week, we knew I did not have the energy to travel too far. We still however wanted to see a new, beautiful place (no compromises there) and hence decided to visit Chicago! 🙂

Chicago has quite a bad rep. So many people asked us why we were going to Chicago for our anniversary. They said it’s quite unsafe and told us to change plans. I feel most cities have safe and unsafe areas and we should do some research before heading to a new destination no matter what. It’s better to use common sense and avoid bad areas and make sure your hotels are in a safe location. We were quite excited about our trip to Chicago and since our tickets were already booked, we decided to be extra cautious but still go ahead with our plan.

And boy am I glad we did… because we loved Chicago! 😀

We had booked our room at the iconic LondonHouse Chicago, which is located on the prominent corner of North Michigan Avenue and Wacker Drive. It is a beautiful, waterfront property that was built in the year 1923. This location is also the historical site of Fort Dearborn. 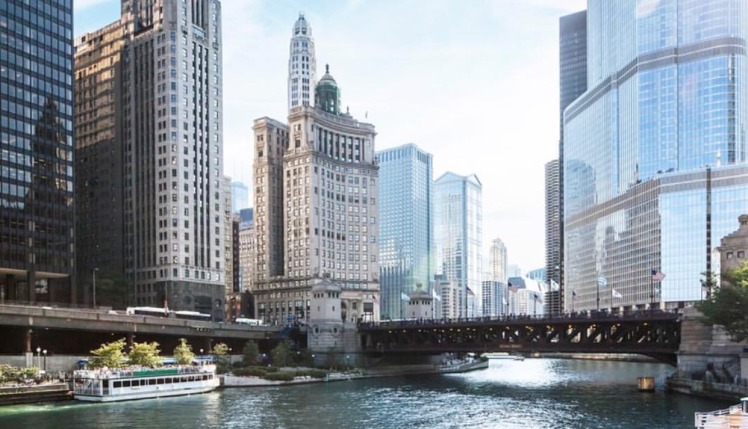 With incredible views of the river and downtown chicago, our hotel was within walking distance from Cloud gate/Chicago Bean, and the magnificent mile as well. The area around our hotel was bustling with activity and had such a cheery vibe. It looked and felt a lot like Manhattan (probably prettier). We absolutely loved it! 🙂

The only complaint I had was the weather in Chicago. It was mind numbingly cold! 😐 Given how sick I was during this trip, the cold was absolutely unbearable. I guess you can’t expect much else in December! 😐

Thank god we live in Atlanta and don’t have to deal with such cold temperatures on a regular basis!

The first thing we did on the following morning was to go on top of our hotel and take in the beautiful views of downtown Chicago. Who wouldn’t love to stay here! 🙂 We took in the views as much as we possibly could and set out to explore the city post that.

The vibe around our hotel was great! Christmas decorations everywhere and lots of places to see around Michigan Avenue. We walked around for a while and kept going indoors every now and then to warm ourselves up with either a starbucks or some delicious deep dish pizza that Chicago is so famous for. A really loved it but I felt the deep dish pizza was a bit too cheesy for my liking! It’s definitely worth a try nevertheless.

If you are ever in Chicago and want to try their world famous deep dish pizzas, don’t forget to visit Giordano’s for some mouthwatering options! 😀 #recommendation #notsponsored

Post lunch and some deep (dish) conversations, 😛 we headed to Willis Tower to catch some breathtaking views of downtown chicago!

Willis Tower, also formerly known as Sears Tower is the 2nd tallest building in the western hemisphere. The 1st one is of course the One World Trade Center in New York City. The elevators go up to the 103rd floor viewing deck in about 60 seconds. They open up to a floor that has a 360 degree view of Chicago and 4 other states apparently (on a clear day).

The Willis Tower is famous for its glass floor viewing ledge that extends outside the building for about 4.3 ft. It offers stunning views of the Chicago cityscape and Lake Michigan. For someone who’s scared of heights, standing on top of a glass floor 1350 ft above ground was quite nerve wracking. But I eventually did, since it’s not everyday you get to visit such an incredible place. It is most definitely a memorable experience… shaky legs or otherwise! 😛

After what seemed like an eternity and a lot of attempts at taking good pictures of each other on the ledge, 😛 we finally made our way back to the hotel and settled in for the night.

The next day was our anniversary! 🙂 We started off our day by paying a visit to the most popular place in Chicago – The Bean/Cloud gate situated inside the Millenium Park.

The Millenium Park was not too far from our hotel and would have been a great walk on a sunny day but we decided to hail a cab for our less than 5 minute commute since the cold was absolutely unbearable. I mean, even the poor little pigeons were huddled together, shivering! 😐

Upon reaching the Millennium Park, my first impression was how small the Bean looked! 😀 I’m not sure what I was expecting but it definitely looked a lot smaller than what I had initially presumed. But it’s quite fascinating nevertheless!

And no matter how many movies I watch in other languages, my mind will always connect everything with bollywood. All I could think was how Aamir Khan and Katrina Kaif danced around the Bean in Dhoom 3! 😀 It’s like they say… you can take an Indian out of India but not the India out of an Indian.. and I completely agree! 🙂 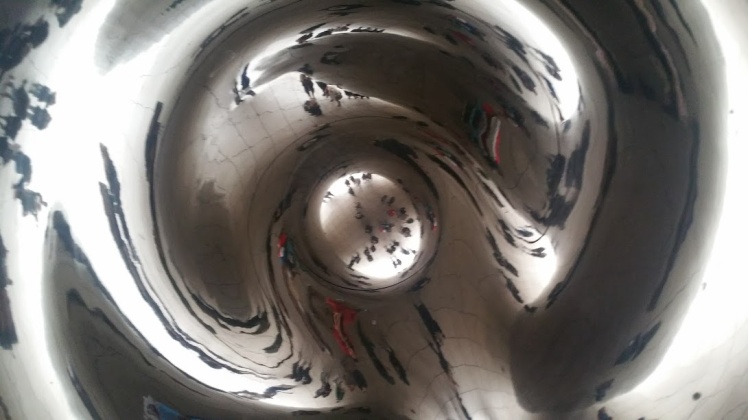 After taking a million pictures by the bean, on the bean, under the bean, 😛 we finally headed out for a late lunch nearby.

We decided to visit Navy Pier post lunch but the issue in Chicago is that the sun sets around 4 PM in winter. 😐 So as you must have already guessed, it was almost dark when we got there! 😐 I really wanted to see Lake Michigan and probably wanted to go on a cruise if possible but based on the limited time we had there, we couldn’t. We however saw it in the dark among a lot of other things! 😛

We got on to the Ferris Wheel in Navy Pier which is quite similar to the London Eye in England. It’s nothing spectacular but still quite nice since you have a view of Lake Michigan on one side and the Chicago skyline on the other. 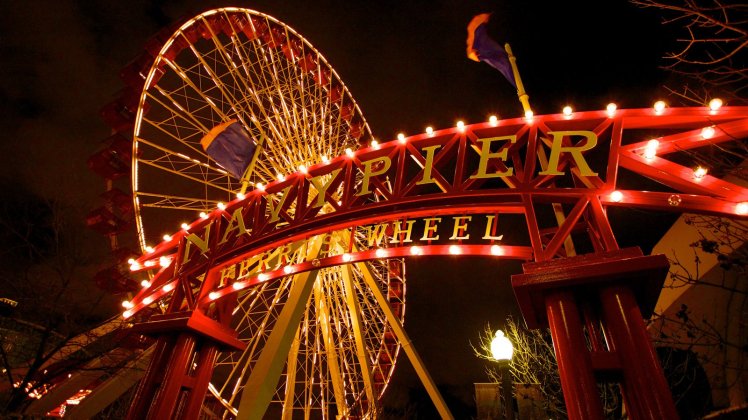 P.S: I can’t believe Aamir Khan stood on top of this ferris wheel in Dhoom 3! 😛

(See, I can’t stop thinking about bollywood no matter what! :D)

After looking around Navy Pier for a while, we headed back to our hotel to rest for a while and get dressed for our anniversary dinner. The husband had made reservations at an amazing restaurant and I was beyond excited. Yayy! 😀

Situated on Michigan Avenue, atop the John Hancock Center, this restaurant is called the Signature Room on the 95th. You can dine on the 95th floor with stunning views of the city of Chicago and a few other states probably from the comfort of your dinner table. 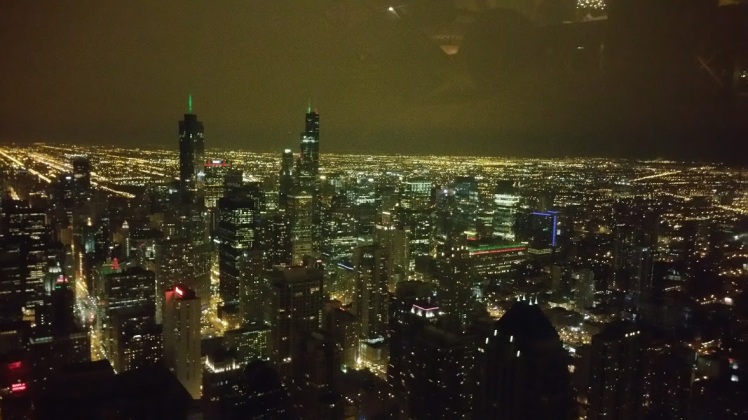 We were completely awestruck!

I mean, who wants to eat when you have a view like that to stare at! 😀 I was happy to just celebrate our anniversary in Chicago, celebrating it on the 95th floor with an incredible view like that was a cherry on top of the cake. All I can say is that we had an incredible time and will probably cherish this experience and memory for a really, really long time! 🙂 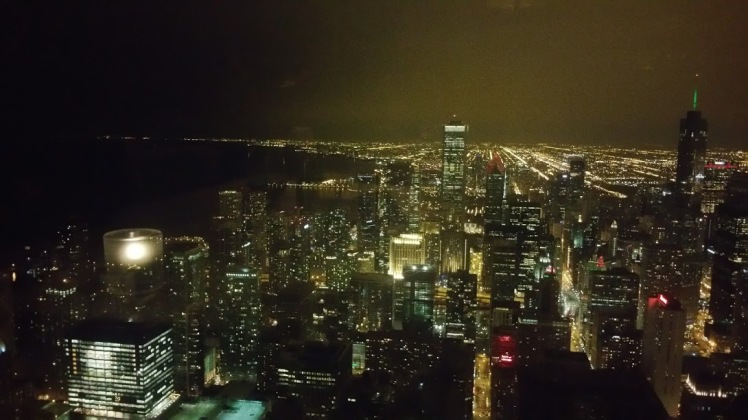 On our last and final day in Chicago, we decided to take it a little easy and just walk around Magnificent Mile for a while, pay a visit to Dylan’s candy bar 😛 and go on an architectural river cruise post lunch.

The cruise began right in front of our hotel and hence was incredibly convenient. We bundled up as much as we possibly could since we had to brave the great Chicagoan cold for the next few hours! 😀

The temperatures had gone down by several degrees on our last day and no amount of layers helped whatsoever. 😐 It was a 1.5 hour open air cruise with 0 degree, bone chilling cold. How lucky were we?! 😀 We still somehow managed to enjoy the cruise and learnt quite a bit about the gorgeous chicagoan architecture and history. The cruise ended with a stunning sunset amidst the Chicago skyline and we definitely couldn’t have asked for a better end to our incredible trip! 🙂

Chicago is really beautiful and we had an amazing time. We definitely plan on coming back to this city another time… but in summer of course! 😀 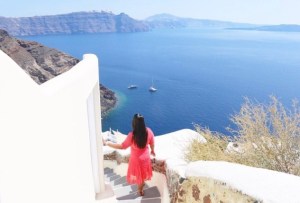